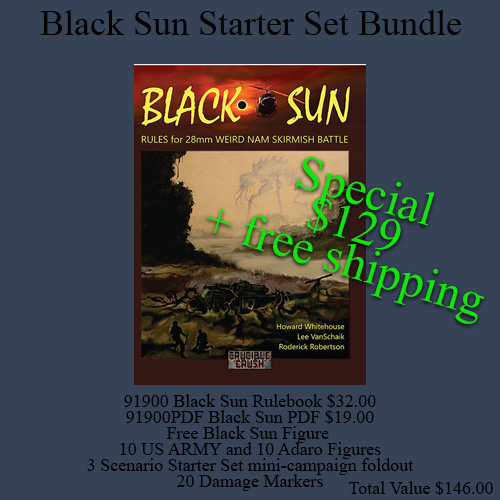 Black Sun is a tabletop skirmish game of survival and combat in an alternate dimension during the Vietnam War. Assemble your force of US Army Soldiers, Viet Cong freedom fighters or spaced out hippies and combat monsters from another dimension, or each other, while trying to get back home. Man we gotta get out of this place.

This rulebook includes everything you need to play except miniatures, including:

This book introduced the factions of the alternate dimension, provides rules for period weapons, and allows players to come to grips with the sanity altering truths of an alien universe. This rulebook doesn't represent everything we have planned for Black Sun it is only the beginning. Page count is 64 pages.

With this bundle get the miniatures you need to play and a special beginners guide and starter mini-campaign you can use to learn the rules.