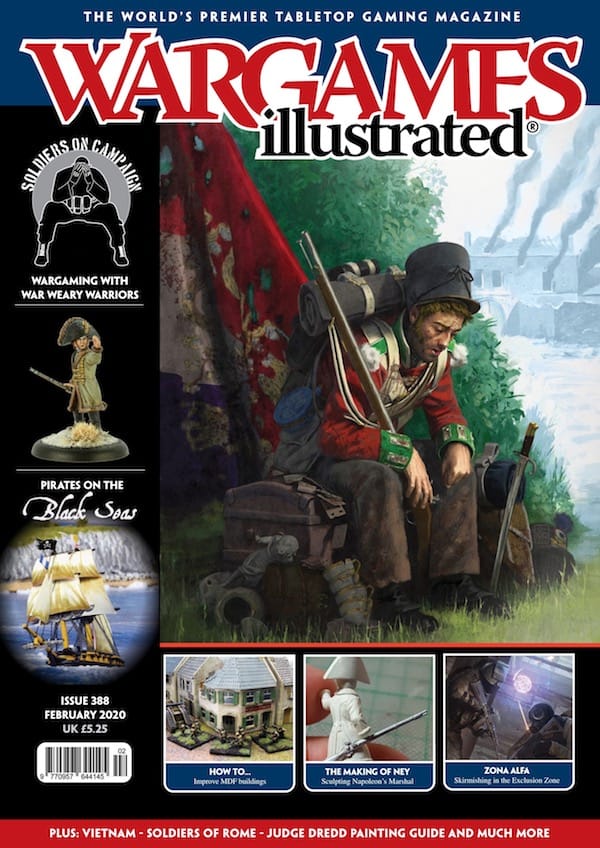 The February 2020 edition of the World's premier tabletop gaming magazine is packed to the brim with content. Within its pages, you'll find a a method to mix the Black Seas ruleset with the era of seafaring pirates, and a painting guide for Judge Joseph Dredd himself.

It’s a quiet time of the year for ‘new stuff’ but we’ve found a few interesting and eclectic items to make you aware of.

It’s time to announce the winners and runners up in the 2019 Wargames Illustrated Awards.

Pete Brown has a look at campaign veterans and asks the thorny question, “Should they be any better than green troops?”

Simon MacDowall returns to look at the effects of campaigning on the Roman and Goth forces during their century long encounters.

Patrick Todoroff, author of the Zona Alfa rules from Osprey Games, shares some of the ideas and mechanics of this skirmish game of exploration and danger.

Empress Miniatures wner Paul Eaglestone provides some background to this war, along with a closer look at the Marines’ on campaign look.

Why I Love ... Battlegroup

Andy Singleton shares his love for these World War Two wargames rules, where combined arms is key and the games are a good representation of the various types of combat.

Jim Graham provides some ideas for the effects of campaigns on our miniature armies.

Colonel (Retired) Bill Gray takes a look at those units and armies who sought to bring a little more panache to the battlefield, within the bounds of the dyes and cloth available.

The Making of Marshal Ney

Kris van Dyck takes us through the process of creating our latest Giants in Miniature figure.

How To ...Improve an MDF Building

Model-maker extraordinaire Paul Davies show us “how to ...” do what it says in the title!

Warwick Kinrade tells us about his forthcoming new rules for the battles of early Imperial Rome.