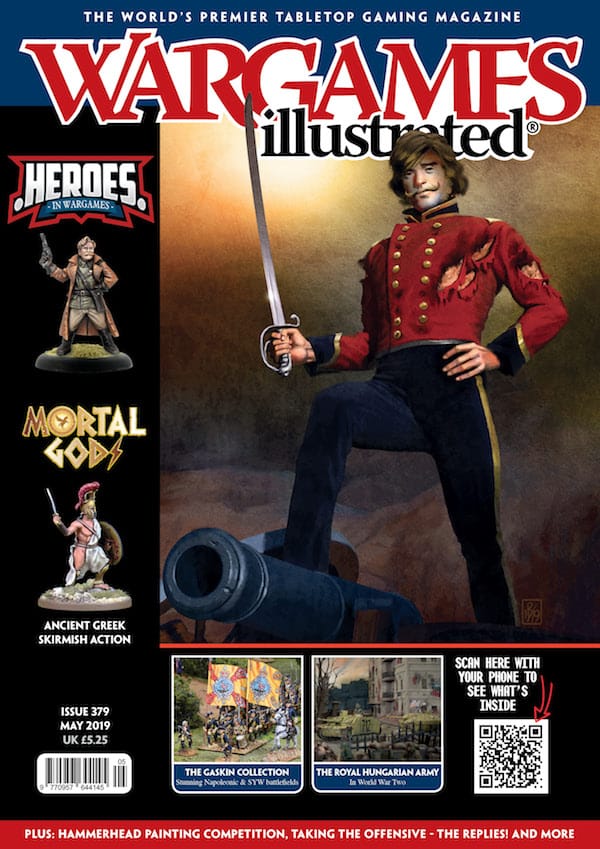 Your freebie cover mount this month is a frame of American War of Independence Colonial Militia Men, courtesy of Warlord Games, providing the opportunity you have been waiting for to get into a new period, or bolster your existing forces.

A look at new and forthcoming goodies in our hobby.

THEME: PLAYING THE HERO
Just how can we set about fielding Heroes on the tabletop? We look at how different rules systems deal with the issue.

RULES SHOWCASE: MORTAL GODS
This game has been causing quite a stir since its recent release. Here’s the low-down on how it plays, and why you need it in your collection.

THEME. WE CAN BE HEROES
One half of gaming gurus Too Fat Lardies – Richard Clarke – shares his thoughts on tabletop heroes and silly names.

THE ROYAL HUNGARIAN ARMY
A  look at what’s out there to help create a World War Two Royal Hungarian Army.

THEME: LORD JOHN‘SALAMANDER’ CUTTS
After reading this article by Barry Hilton on one of his historical heroes, you will be as fascinated by The Salamander as we were.

ADRIAN MADE ME DO IT
Mark Hargreaves has had the pleasure and pain of working on numerous modelling projects for Adrian Shepard. In this article he tells us about some of the highlights.

THEME: BRING ON THE ACTION MEN
Neil Smith provides suggestions for getting several historical heavyweights into the thick of the tabletop action.

HIT THE BEACHES
The Battlefront New Zealand team tell us about their forthcoming WWII project.

THEME: FLASH BANG WALLOP WHAT A HERO!
Our latest Giants in Miniature figure, Lord Flash, gets a shameless plug with these rules for using him as your tabletop hero.

THEME: RISE OF THE ANTI-HERO FLASHMAN AT THE ALMA
What happens when infamous anti-hero Harry Flashman joins a wargame….

DITDC PREQUAL
Author of Death in the Dark Continent, Chris Peers, provides us with rules for using 16th and 17th Century warriors and weapons in the game.

THE GASKIN COLLECTION
Bill Gaskin has a unique collection of miniatures from several different periods. He invited us to take a look at those of the Napoleonic and Seven Year Wars.

FIGHTING TALK: TAKING THE OFFENSIVE – THE RESPONSE
In response to last month’s piece, we have had several interesting letters regarding Pete Brown’s article on ‘causing offence’ in our hobby.

HOW TO… MAKE WATER SPLASH MARKERS
Paul Davies show us how to model plumes of water – ideal for Cruel Seas.