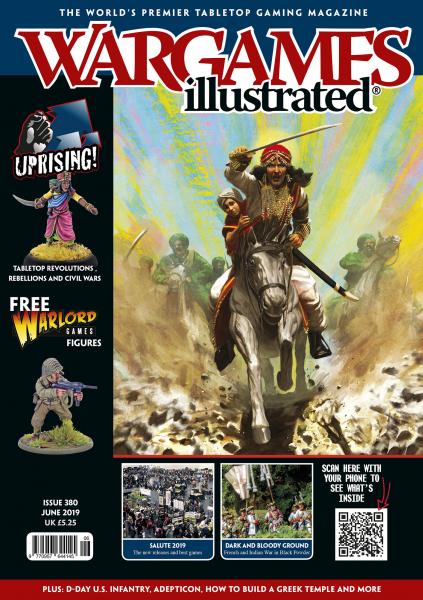 Your freebie cover mount this month is a Bolt Action World War II US Infantry frame, courtesy of Warlord Games. Tying in nicely with the 75th anniversary of D-Day, at which American troops like the ones represented on the frame played a major part. For more information see our ‘Frame Focus.’

OBSERVATION POST
A look at new and forthcoming goodies in our hobby. With a focus on ‘spotted at Salute 2019’.

COVER MOUNT FOCUS: U.S. INFANTRY AT D-DAY
Dom Sore presents some thoughts on this month’s cover mounted frame, which commemorates some of those who hit the beaches on D-Day 75 years ago.

THEME. LAKSHMI BAI: WARRIOR QUEEN
Steve Blease explores the efforts of this amazing woman who defied an Empire and led her people against the British in the ‘Great Rebellion’.

DESIGNER’S NOTES: DARK AND BLOODY GROUND
Pete Brown introduces us to his latest Black Powder supplement which covers the French and Indian Wars.

THEME: NO BRIDGE, NO COUNTRY!
Bill Gray takes us to a Revolution that is little known outside Hungary but offers some interesting gaming options and a short but enjoyable campaign option.

SHOW REPORT: SALUTE 2019
A tour of the table-topping highlights from the Salute 2019 wargames show.

THEME: PIECING TOGETHER THE GREEK CIVIL WAR
Matt Moran shows us how to convert models for use in the Greek Civil War
of 1943-49.

SNAKEMEN AND OTHER SCALY THINGS
Gaming Guru Rick Priestley provides us with an army list for using Snakemen in the Warlords of Erehwon.

SAGA AGE OF MAGIC: COULD IT BE MAGIC?
Fanboy Dom Sore takes a close look at the latest SAGA universe.

SHOW REPORT: ADEPTICON
‘Head Geek’ Teras Cassidy shows us some of the less obvious games from the massive U.S. convention.

WARGAMES DESIGNERS, THE NEXT GENERATION
Doctor Peter Wright and Karl Perrotton of Crooked Dice tell us about a group of students from Edge Hill University who have been working on a new set of wargames rules as part of their studies.

WARGAMER’S SQUINT
We asked ridiculously talented figure fiddler Mark Hargreaves to take some WWII plastic figures and turn them into 1930s Tommies for the North-West Frontier, and he did…

WARGAMES SPACES: ERIC THE SHED
Our latest look at one of our reader’s wargames rooms takes us to South West London where we look around Eric’s garden ‘shed’.

MARCHING ON WITH BATTLEGROUP
Games designer Warwick Kinrade talks to us about WWII game Battlegroup’s past, present and future plans.

HOW TO … BUILD A GREEK TEMPLE
Need a temple for your Mortal Gods battlefield? Paul Davies shows us how to scratch-build one.