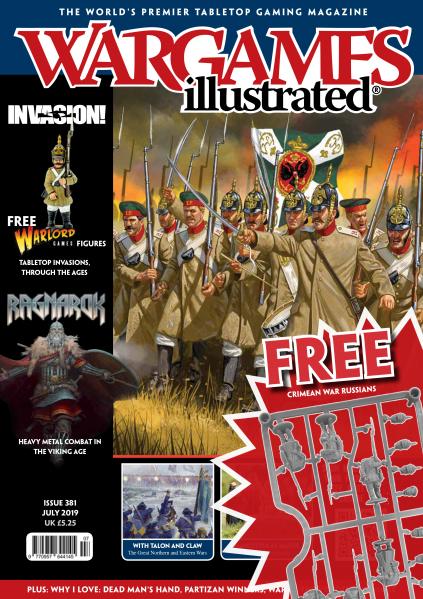 OBSERVATION POST
A look at new and forthcoming goodies in our hobby.

THEME: THAT FLOOD OF SULLEN SOLDIERY
Soimonov’s assault during the Battle of Inkerman, 5 November 1854. Inspired by this month’s free cover mount, Rick Priestley provides a Black Powder scenario and special rules for using your new Crimean War Russians against the vile British invaders.

COVER MOUNT FOCUS: PAINTING YOUR CRIMEAN WAR RUSSIAN INFANTRYMAN
Jamie Getliffe (who painted the Russian on the cover) shows us what paint to put where.

DESIGNER’S NOTES: RAGNAROK
Games Designer Tim Korklewski tells us exactly what “Heavy Metal combat in the Viking Age” is all about.

THEME: THE BATTLE OF CARRICKFERGUS 1760
The French attack on Ulster has been described as a “forgotten footnote of the Seven Years War” but for wargamers this rare French landing on British soil provides some great wargaming opportunities, not only of the event itself but also for the “what if” battles it presents. Pete Brown takes up the story….

PARTIZAN 2019 – THE WINNERS
A look at the best tables from the latest Partizan wargames show.

TERRA FORMING THE ELF KING
Chris Abbey of Sally 4th show us how he went about ‘terra-forming’ the terrain for a characterful demo table. separate

THEME: THE AMERICAN INVASION OF CANADA 1785
Simon MacDowall introduces us to a sideshow of the American War of Independence which takes the war north against local Canadian and garrisoned British forces.

LEARNING THROUGH THE LENS OF PELELIU
Passionate History teacher and gamer Jared B. Fishman tells us about a recent wargaming project he was involved with which galvanized the students at his school and highlighted the educational benefits of wargaming.

WHY I LOVE: DEAD MANS HAND
As part of our irregular series in which readers tell us about their faviourite games, John Hart blows the trumpet for Wild West skirmish shootout Dead Man’s Hand.

THEME: FOREVER UNDIVIDED
The First Schlewig-Holstein War 1848. Bill Gray doesn’t linger on the causes of what is famously the most complicated war in history, rather he gets down to the reasons you should consider gaming it.

AN UNCIVIL WAR
An introduction to the war in the Vendée 1793. Wayne Bollands offers an insight into the counter-revolution fought against the Republican forces in Western France.

THEME: THE ESTONIAN WAR OF INDEPENDENCE 1918 – 20
Matt Moran introduces a little known series of events that saw invasion and counter-invasion over the course of a bloody struggle to create a new nation.

MANCETTER AT SALUTE
Show circuit showman Simon Miller tells us about the striking Boudiccan Revolt game he ran at this year’s Salute.

DESIGNER’S NOTES: WITH TALON AND CLAW
Barry Hilton gives us the inside track on this new supplement for his popular Beneath the Lily Banners rules.