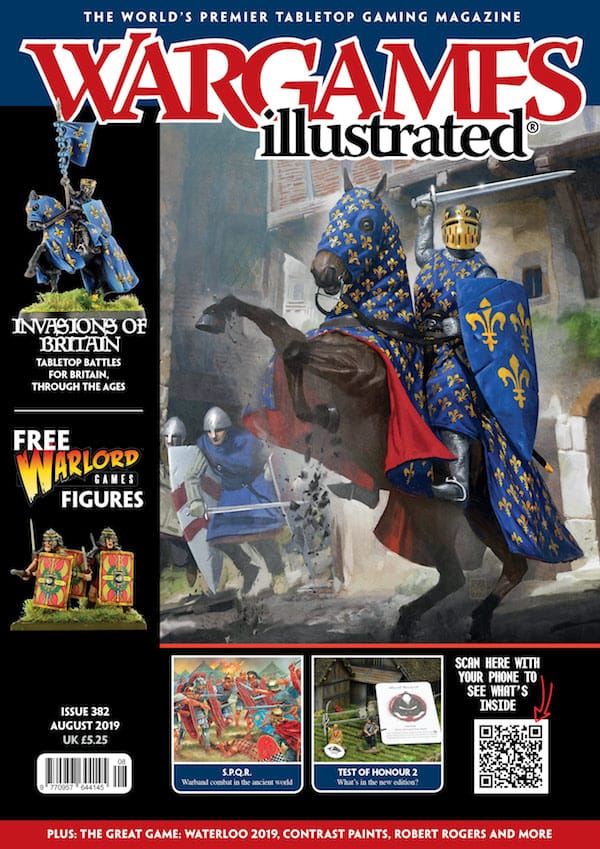 I remember my old history teacher telling the class “Britain has only ever been successfully invaded three times throughout history. Once by the Romans, then by the Anglo-Saxons and finally by the Normans in 1066”. As a twelve year old boy I just scribbled this down in my jotter and didn’t say “What about the Dutch invasion of 1688 – how did this differ from your distinction of the Norman Invasion?” and “How did the Anglo-Saxon invasion technically differ from the Viking Invasion?” Mainly because I had never heard of the Dutch Invasion/Glorious Revolution at the time and I’m still not technically sure how the Anglo-Saxon invasion differs from the Viking one – other than being more successful. Suffice to say, the history of the invasions of Britain is not quite as straight forward and is significantly more interesting than Mr Dams might have had me and the rest of the class believe.

In this issue of Wargames Illustrated we explore some of the more interesting invasions of Britain, including those that failed and some from literature which never actually happened at all, but could have done. Also look out for our features on two new ‘buzzy’ games, Test of Honour Second Edition and SPQR.

OBSERVATION POST
A look at new and forthcoming products in our hobby.

COVER MOUNT FOCUS: SE VICTOREM EXERCITUM!
Neil Smith describes the process of promotion and the panoply used by a soldier of Rome, as exemplified by the latest free Warlord Games figures to be found with this magazine.

THEME: KILL THEM ALL!
Neil Smith returns to discuss the background and wargaming potential of Septimius Severus’s invasion of Scotland during the Third Century, 209-210 AD.

RULES SHOWCASE: TEST OF HONOUR  SECOND EDITION
We check out what changes and additions have been made to this popular Samurai skirmish game.

THEME: AN EARLY 13TH CENTURY GUIDE TO INVADING ENGLAND
In 1215 the future King Louis VIII of France was invited to depose ‘wicked King John’ and take the throne of England. WI Editor Dan looks at what the French Prince would, and the wargamer will, need in this 13th Century Battle for Britain.

A GREAT (BIG) GAME OF THE GREATEST BATTLE
Giles Shapley, umpire on the day and our ‘correspondent in the field’, provides an account of the recent Great Game of Waterloo re-fought at the University of Glasgow.

THEME: DOUBLE-DUTCHED!
Barry Hilton joins in with this month’s theme by introducing us to the gaming potential of the Dutch invasions of Britain in the second half of the 17th Century.

THEME: BOSWORTH  1745
Jim Graham supplies a British Invasion theme article which includes a classic ‘what if?’ which could have made for a very different United Kingdom.

THE CRUSADING GENOESE
Dr Gianluca Raccagni provides a foreword for an article by Matthew Harris (History and Games Network) on the Genoese in the early Crusades, 1099-1200.

BUILDING A PALAZZO
David Bickley’s shows us how he made a tabletop Italian palace.

THEME: WAR OF THE WORLDS REDUX
Bill Gray discusses wargaming the Martian Invasion of Britain using the ‘Re-Born’ All Quiet On The Martian Front.

STORM IN A PAINT POT
A look at the new Contrast Paints from Games Workshop.