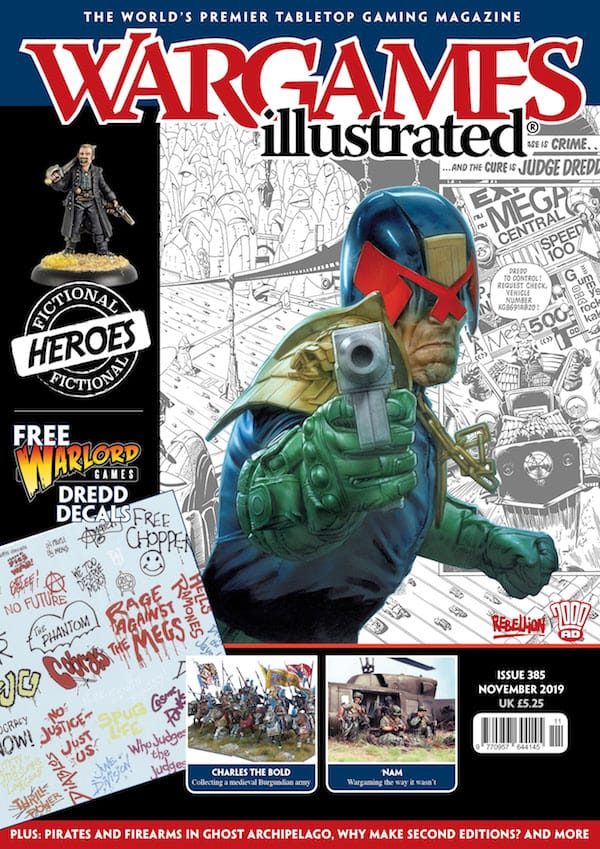 THEME: THRILL-POWERED GAMING – A 2000AD TABLETOP HISTORY
A personalised potted history of the figures created for 2000AD characters over the years, encompassing the Judge Dredd universe and more.

THE ARMY OF CHARLES THE BOLD
Simon Chick tells us about his army building project, researching and representing the medieval Burgundian army of Charles the Bold on the tabletop.

THEME: GETTING READY FOR DREDD
We take a tour of Warlord’s in-store ‘work in progress’ tabletop set-up for the new Judge Dredd miniatures game.

THEME: BARRYAT OF LYNDONIA
Roly Hermans explains how he was inspired to create his own miniature heroes and their route to the tabletop.

NAM – THE WAY IT PROBABLY WASN’T
A personal take on getting into a “new to me” wargaming period.

A WARGAMER’S 17TH CENTURY ODYSSEY
Neil Smith explains how a series of books inspired him to transfer his new found enthusiasm for the 17th Century from the page to the tabletop.

THEME: THE TREASURE OF CAPTAIN FLINT
Everyone knows there are “absolutely no pirates” in Ghost Archipelago, or are there? We persuaded author Joseph A. McCullough to introduce one of the most famous fictional pirate heroes of all time, Captain Flint, into his game.

GASLANDS DAY 2019
The roar of diecast engines and the chatter of resin and plastic machine guns were only eclipsed by the voices of the gamers having fun!

CREATING A PIECE OF FUTURE HISTORY
Pete Stedman tells us how he scratch-built a slice of Dredd history – a vehicle from the epic Cursed Earth story.

THE ECONOMICS OF SECOND EDITIONS
Joseph A. McCullough gives us the inside angle on producing Second (plus third, fourth and eighth) Editions of games.

A DUMMIES’ GUIDE TO THE FRENCH AND INDIAN WARS
A beginner’s guide to this fascinating war within a war.

MAKING THE TEMPLE OF DOOM
Nick Buxey shows us how.